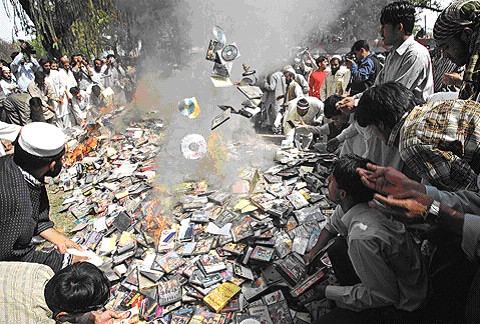 “Book Burning” has been traditionally used and continued for many years in the coarse of history. People burned books, in order to show hatred, uncertainty and disagree or when they opposed the culture, religion and ethnicity of a book. People believed that the destruction of books are a destructions of their enemies. Book burning has been most famous in the past in when Hitler and his Nazi party burned many books. Between 1817 and 1933, university student organization burned books. This was considered un-German. In 1933, a student association group started to burn any books that weren’t written by Germans. Later on, in that same year, a group of university students burned over 20,000 Jewish books. Another group of people claimed to go on a strike/ parade to show their hatred for Jewish people. This group included professors, students, workers and many more. Students happily threw books related to Jews into the fire they built and vandalized all Jewish related books. Nazi claimed the Jewish book burning a way to “cleanse” their nation. The Nazis burned the written materials of German-Jewish poet Heinrich Heine’s books who had written in his 1821 play “Where they burn books, they will also ultimately burn people.”

·         In March, 2001, an association in burned the Qur’an to show their hatred towards the Taliban..
·         In July 2001, many Harry Potter books were burned, by the Harvest Assembly of God.
·         In April 2004, a book burning took place in , . The culprit behind the burning said that he was inspired to this because of so many book burnings-taking place in the middle east.
·         In 2011, a pastor Terry Jones burned many copies of the Qur’an stating, "Islam is of the Devil," This angered many and started a protest around the world. Leaders of big countries noticed this disturbance including Barack Obama. They charged him to stop this madness saying and that the Islamic Holly Book is to be respected and prayed for. 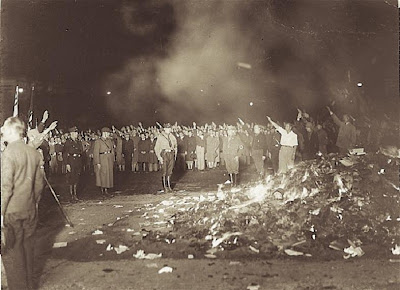 Quotes:
"There were the erased pages of Mein Kampf, gagging, suffocating under the paint as they turned."
"Did they deserve any better, these people? How many had actively persecuted others, high on the scent of Hitler's gaze, repeating his sentences, his paragraphs, his opus? Was Rosa Hubermann responsible? The hider of a Jew? Or Hans? Did they all deserve to die? The children?"
"I have hated the words and I have loved them, and I hope I have made them right."

Posted by The English Class Blog at 10:51